Below is a tip submitted by one of our customers who has some innovative ways to use the SecureCRT® chat window that might save you some time—or maybe even reduce your cell phone bill. This tip initially appeared in our July 2003 newsletter.

Note: Prior to version 7.2, the Command window was called the chat window.

Type in real time over a slow connection
"When I'm using a slow connection, such as the network service in most hotels or my cell phone network service, the Command window lets me type in real time. Without the Command window, I can be ten or fifteen characters ahead of myself before I spot a typo and have to count the number of cursor steps backwards to fix it."

Save money on your cell phone bill
"If I’m using my cell phone's network service to connect to the internet for remote shell, I reduce the amount of data sent by using the Command window. With the Command window, I send a line or paragraph at a time instead of a character at a time. Since traffic is metered per megabyte block, this cuts the cost by about a factor of ten. SecureCRT paid for itself in two months of AT&T wireless bill savings."

Below is a screenshot showing a VShell® connection with the SecureCRT Command window being used to set up a port forward for email. 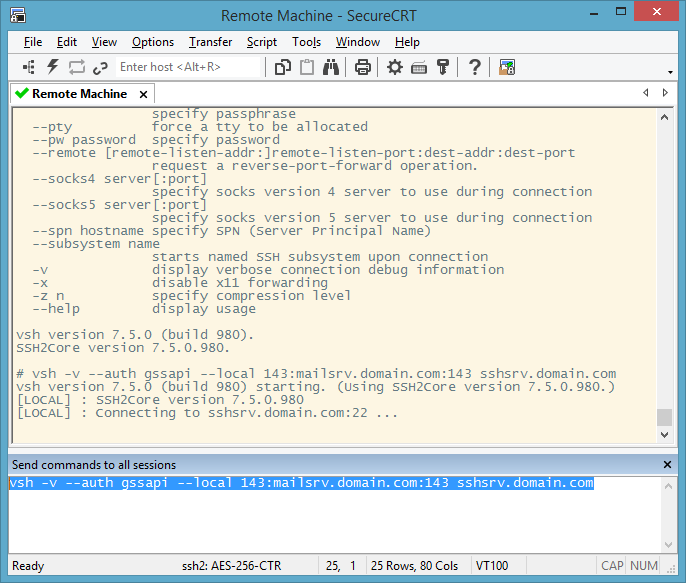 The Command window can be toggled on/off by opening the View menu and choosing the Command Window menu item. 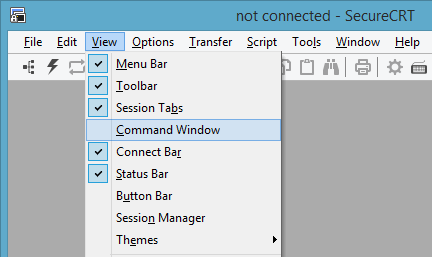 To have the Command window always be visible without the need to enable it via the View menu: